A downloadable eldritch artifact for Windows

Baba is back in this short freeware puzzle game! Revisit familiar mechanics and experience some wacky new surprises! Are you HARDCORE enough to complete all the levels??

Full credits in the Readme.txt file. Use Enter to move along in menus (or a gamepad).

game is you is so fun

cant wait to see the speedruns

this just made me buy the real game :/

wait... i think i've seen that explosion graphic in doom before

How are you so TRUE ?

Reply
Quacked Up27 days ago

exactly the right amount of xtreme

i could not play the game:(

This is what should happen when you do Level is broken

how to beat level 8

i love this sm

Scratched the itch, scratched it well.

Am amazing variation on Baba Is You. Never have I felt such visceral hatred and adoration for a developer.

yeah, pretty much. i saw this and thought.
"oohh, you cheeky fucker"  XD

bruh i just broke everything i changed the codes so i cold win istantly lol ( i rebeat the game legit chill).

probably not the intent, but this is a pretty good demo for "baba is you." enjoyed this enough that i finally shelled out 15 bucks for the full thing.

level 7 is evil but level 8 is eviler

*sees Baba Is You Extreme* "eh might try it out, probably just a little fangame"

*sees the dev* "okay nevermind this is definitely worth a shot."

This comment/review has spoilers for some of the mechanics within the game, as well as functions only accessible after completing the game. Tread with caution.

I'll be honest. This is a very amusing little spin-off game with some amusing bonuses not seen in Baba Is You. The new Boom and Link words are interesting and could have merit in other ways (maybe using Boom to knock another word into place, or knock others away), but they don't see much use aside from this. Boom is even only in one level as a joke- even though it has potential.

Regardless, seeing as this is from the Baba Is You dev themselves, there is a possibility of not only extensions of this, but potentially adding it as a sort of mini bonus gamemode for the original Baba Is You. And the two BIY-XT exclusive words may be given some function in Baba Is You- Boom may cause all nearby words or objects to be pushed back in their respective directions. (Not sure how Link would function in the original game though.)

Either way, this is an amazing little spin-off, and I would love to at least see a level creator for this spin-off, if not a sort of larger release once the worst of the issues are dealt with. I think that this game's difficult movement is actually balanced out by the fact that you can actually retrieve words from corners and walls, unlike the original. By slamming yourself into them, you can sometimes dislodge the words, and eventually pull them away from their normal resting space. This can result in some of the levels being made a bit easier to manipulate, if you take the time to do so.

On top of this, the level featuring Boom even makes this fact clear, as sometimes when the Wall Is Boom trap triggers, the Baba Is You sentence- which shouldn't be able to move, being in the corner of the level- can sometimes be deactivated, and always shifts a good amount. As such, it shows that it is possible to move words from corners and walls in this variation.

*SPOILERS FOR THE ENDING OF THE GAME*

Once you beat the tenth level, you're greeted by a final 'level' which is home to the only appearance of the Game word. It's tricky to maneuver here, as you can initially trigger Game Is Defeat by accident, as the sentence may activate even with small gaps between the letters- instantly closing the game. But if you can maneuver it right, this level is home to a number of creative, amusing bits the devs snuck in.

The first one of note is when you begin to experiment with the Game word. Some combinations break the game (literally), such as using Game Is Baba (or any other equivalent). This will cause a short delay before the game closes outright.

However, the next interesting thing is when you flip that idea and attempt Baba Is Game (or a similar equivalent). Upon doing so, the object in question will turn into the icon of the game, akin to the icon you would see on your desktop for the game. Sadly this icon has no interactions, as moving an object tagged as You onto it simply moves the object underneath, and clicking it with the mouse cursor has no effect either. It is a nice touch though.

After this, you have three more words to play around with in the area...

First is Link. Sadly it has no interactions with Game, as connecting it and another word with Link does absolutely nothing.

Creating Game Is You is quite amusing. Since this game has no full-screen mode, it makes use of that- and thus, since Game Is You, moving the arrow keys now moves the game window around your screen according to what keys are pressed.

The final interaction is Game Is Win. But that's something I'll leave for you to discover. ;)

All things said, this game is a sort of additional gem on the already-massive crown of Baba Is You, taking the original formula and tweaking it just enough to where it's fun, amusing, and the perfect balance of the classic Baba Is You formula and the hilarious Jelly Mario aspect. It's a great bonus for those who enjoy the game-breaking aspects of Baba Is You and also like the strange physics of Jelly Mario. The only downside is the interactions between Key Is Fall and Rock Is Push in level 7...

My rating is 9/10. The only thing I don't like is that level 7 jank. If that gets fixed, it's straight to a perfect 10. And if more gets added, whether here or in Baba Is You... well, I'll figure out how to deal with that if it does happen.

BOOM is an existing property word already in Baba, but it's not used in the maingame lol. it's been used in custom levels, most memorably in Baba Is You Repose: Remote Ridge area

I realized that upon having gone back to the original. I feel partially like a moron, but I had never gone much into custom levels.  I wish it did more that just... unexist objects. But eh- I guess it makes sense.

...Baba Is You DLC Xtreme Update when

I'm confused. I tried game is win but just it closes like most other "game is" statements.

Game is link only works after turning an object into game.

Also by the way you can edit the levels with a text editor.

If you re-open the game after doing Game Is Win there will be a star which has "Thanks for playing" underneath it. That isn't usually there- it only appears after making Game Is Win.

Please make a version without jelly physics that makes it possible

Where do you get it

I didn't even realize at first that this was made by the original BIY dev and thought it was some random funny parody game. I would love to see a full DLC version of this for the main game now!

"key is fall" i wonder what that means

Can you release an OPEN SOURCE to modd the game . I know you can mod the game in code.lua but you can't edit the exe

of course I haven't played this yet...

If you're gonna crash the game on Game is Noun, perhaps you could also change the icon image for the game to the image used for that Noun? Fun game though! :) 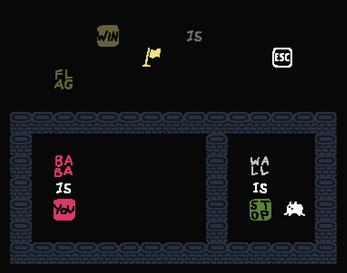 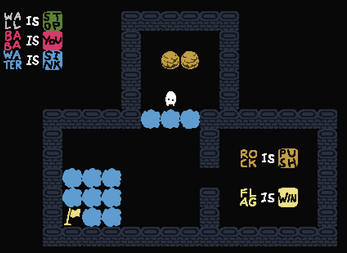 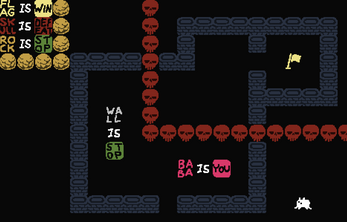