A downloadable meat chunk for Windows

A horror puzzle metroidvania where you guide a plumber looking for a reported leak deep underground in the Myceline Monarchy, Brooklyn, NY. Find the leak, fix it, and return to the surface!

Made using Multimedia Fusion 2 by Clickteam.

In order to download this meat chunk you must purchase it at or above the minimum price of $2 USD. You will get access to the following files:

Had a lot of fun playing this game, especially randomly screensharing it to my friends and them being confused why they were looking at a squelching meaty mario game

I have conflicting feelings with the game. It starts hard, but at some point just becomes easy, also I'm not a big puzzle fan, a friend gifted the game to me. In the end, I think it's an ok game that is a little rough around the edges. Maybe some people that love puzzle heavy games are going to love it. 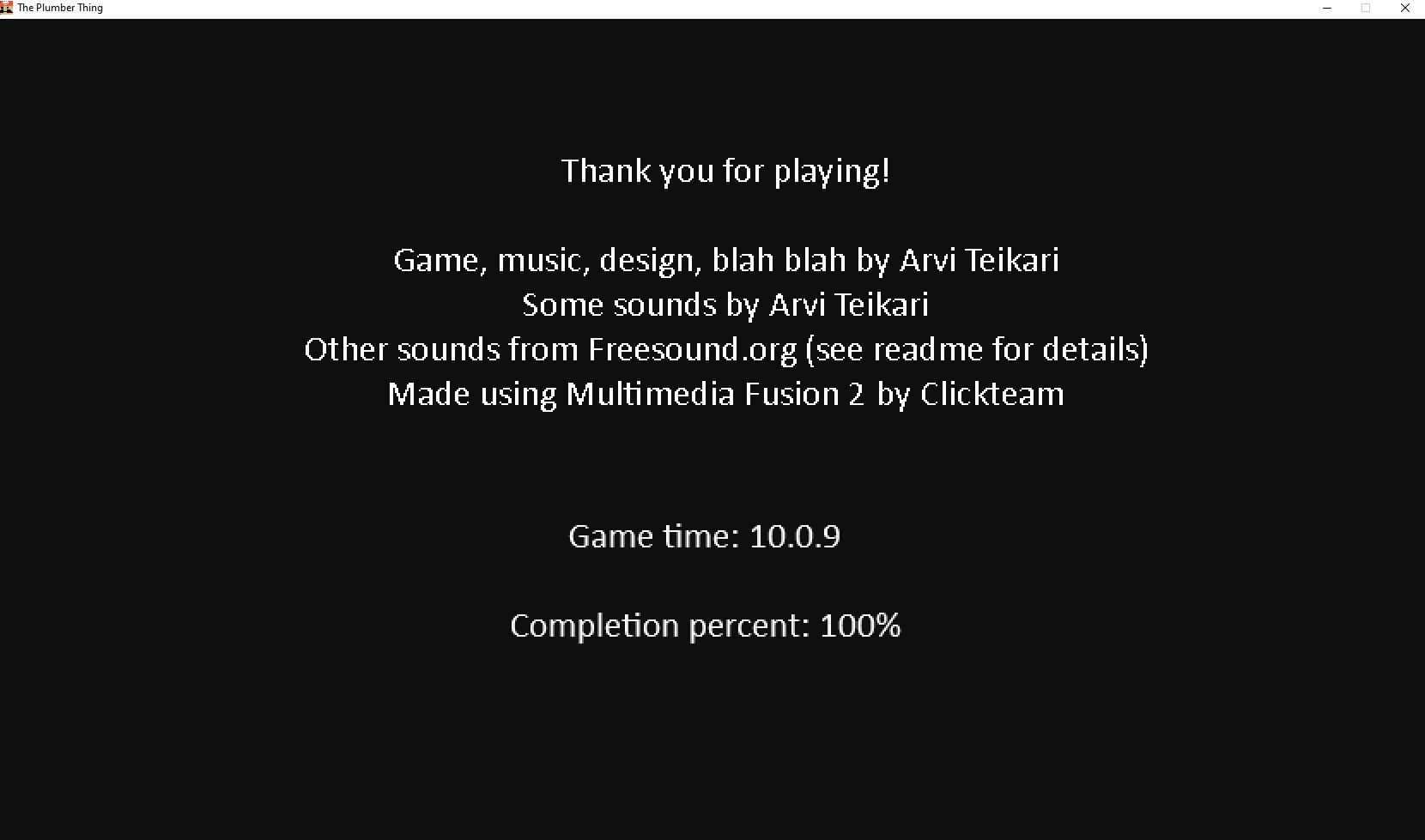 Great game man, IDK why u r so upset.

How do you switch to a newer version of the application without deleting save files?  It's not immediately apparent where the save file lives, and the data folder is larger in the newest version than the original, so I don't think I can just swap the exe out only.

The save file is in users\<your username>\AppData\roaming\Plumber\, so replacing the game files won't delete your saves! :)

I got stuck after getting the "stick to surface" upgrade and slowly traversing the map looking for the place I can go got boring. Sorry.
I'll try again tomorrow maybe.

I'm planning to add some guideposting; the lack of knowing where to go is a big problem atm. For a hint for you: you have now all the tools to win the game.

Thanks for the suggestions! I definitely want to work especially on the usability of Edit Mode.

This looks great! I'd like to know what the ESRB rating for this would be and why it would be rated that before I buy it though, I'd appreciate help from someone who played the full game. Thanks!

I've no idea what the official rating for this would be, but the game contains splattering blood, body horror (including spider-like transformations), meaty squelching and such. It's very cartoonish in style, but especially the sound design has been too uncomfortable for some, so do consider this before buying.

One of the coolest games I've played this year so far, really interesting and flexible main mechanic explored to surprising depths. I'm not the biggest puzzle fan and generally not very good at them, but this one was just the right difficulty for me and I love how there are multiple solutions to many of the challenges.

I had a similar issue with this as I had with ESA, which is constantly running into dead ends after clearing several rooms and then having to go back having found nothing of use, something that hinders the joy of exploration I usually get from good metroidvanias. It's a bit different here because there's a lot of puzzles that require creative thinking, meaning it's often hard to tell which ones are solvable and which ones are outright impossible until I come back with the necessary upgrades. I was also not always sure if my solution is intended or a cheese, e.g. using the momentum from walking which carries over for a bit after entering and exiting edit mode.

Overall it's a bit rough around the edges, I assume due to time constraints, but for something made for a small Itch bundle I didn't expect to spend a good 5 hours on it and have such a good time.

Thanks! I understand the issues you had with guideposting; I'm intending to add some stuff in the game that at least points you towards powerups so that you can have a clearer idea of where progress might be.

Are there any specific exploits that would result from being able to delete modified parts directly or is that just a limitation of the editor?

It started out as a UI limitation (normally you can never select upgraded bits) but I think I had a hunch it could be relevant for some puzzling. I'm less sure now that I think about it; I'll add adjusting that to my to-do. Thanks!

so bad nintendo copied this game :(

It's Metroid, it's Mario, but actually it's The Plumber Thing. No spoilers, but if you haven't played it yet, there's an irresistible twist. The way the the player character options and control develops throughout the game is extremely clever.

When you start the game, the floor is not displayed and the character falls.
It seems to be incompatible with my PC environment and there are others who have encountered the same bug. 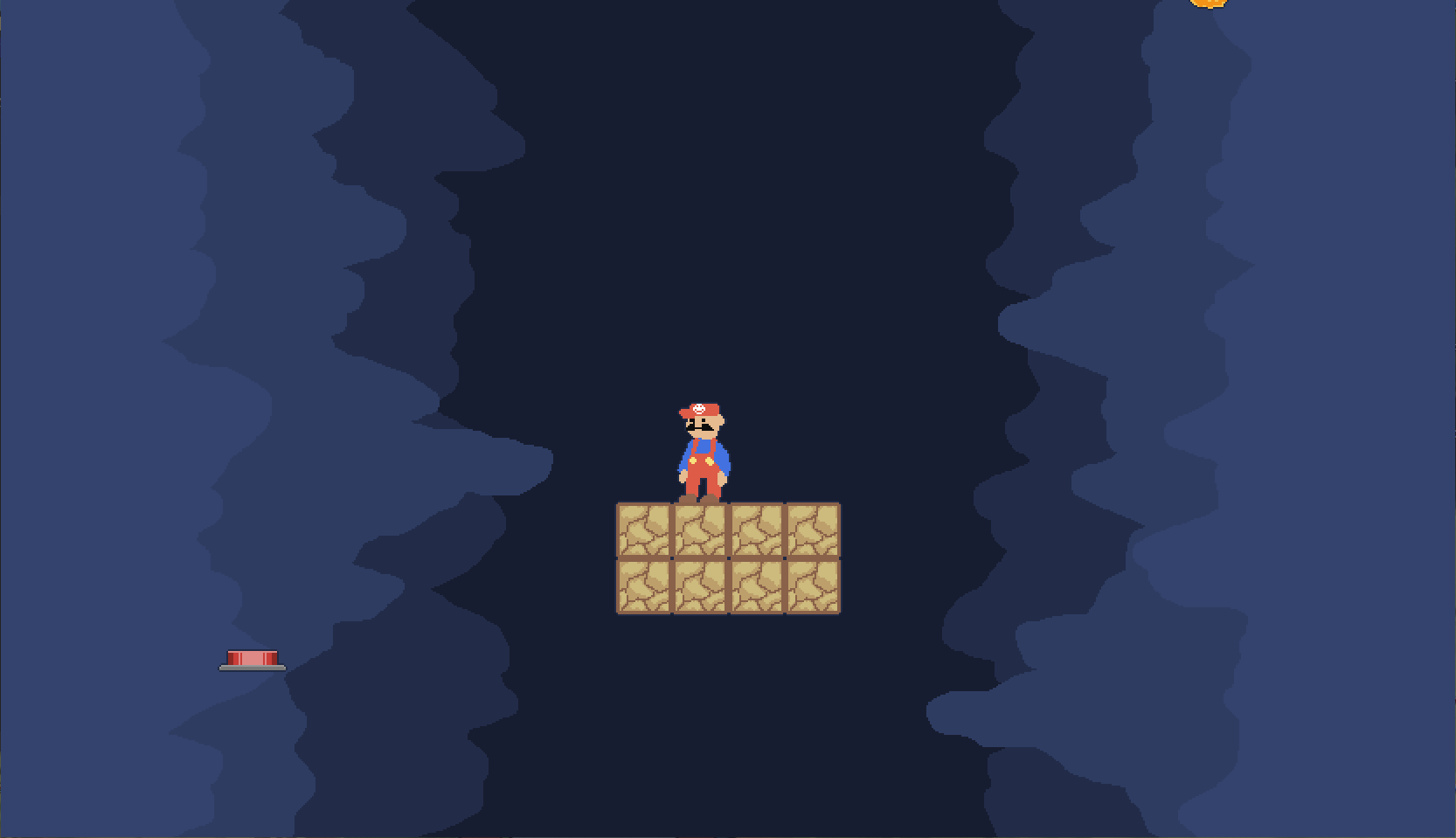 This issue is most probably caused by the game being placed in a folder that has read/write permission conflicts. Could you try to place the game files in a folder on the Desktop or the C:\ root and see if that helps? Alternatively, does the data\ folder contain a file called just "map"?

Thank you, I was able to start it correctly by moving the game file to C:\.

Hmm, someone else had a similar issue; I wonder if the game files are somehow especially "suspicious" in Windows' eyes, leading to these issues...

Can you add save data management? I wanted to erase a save file to make a new one and i had to look through all my folders then so i could delete it manually.

Other than that though it was a wonderful experience, as you can probably tell from the fact that i want more than 3 total saves lol. Great job :)

Yeah, that's a fair point. Glad you enjoyed the game! You can currently hold right mouse button on a save slot to erase it, but this isn't indicated anywhere in the game.

"- MAJOR FIX: The top-right corner of the map had been rendered pretty much inaccessible by accident"

One very small nitpick is that I think the jump upgrade could have a more distinct button. I sometimes used it when I actually wanted to use the legs, although I've gotten more used to it by now.

I'm sure you've noticed, but the metroidvania aspect can make it hard to tell whether a certain powerup is required or I just need to try harder. Although the only time I've felt stuck (aside from trying to get to the top-right corner) was before getting the sticky upgrade, ended up doing something similar to hotfist's clip. On the other hand, now that I have some size upgrades, I've run into the opposite issue. It feels like I'm cheesing puzzles that were supposed to be harder, because I can often just build a path directly to the checkpoint or coin.

Other than that, it's great. Haven't beaten it yet but it feels like I'm approaching the endgame.

Yeah, I've noted the jump/walk buttons being a bit annoying like that; same for the lack of progression indicators. Thanks for the feedback!

As for the size upgrades, I've noticed the same issue. In general I don't *mind* the player being able to cheese some puzzles, but with full powerup set it gets a bit much. I'll probably try to either find a way to disallow that via puzzle design or tweak the numbers in a later update.

Having fun with it, but I'm not sure how to use certain things. Like I just got the "sticky part," and I can't figure out what to do with it. I've tried moving blocks with it, I've tried using it in conjunction with the feet to climb walls, nothing. How am I supposed to use it?

If it's against a wall, it prevents you from falling. I should've put a proper tutorial right after it, sorry.

The combination of body horror, mario and metroid is absolutely amazing, and the title screen was such a great gag.

Some feedback - It's REALLY easy to press R by accident. I'm guessing you don't want to add remappable controls or controller support, but maybe add a "long press" for R to respawn - could even have mario vibrate for a sec before he pops while you hold it as a little warning and it could look really hilarious.

The menu never moves from the top left, so this can occasionally make it extremely difficult to work your way up into the top left.

WASD is sort of supported for moving out parts in edit mode, but it seems especially in the early game to lose the cursor and this confused the heck out of me at first as I was just trying to use the keyboard or controller with keyboard keys mapped to it.

I was able to squeeze through this gap in the green area -
https://clips.twitch.tv/MistyStormyAubergineCorgiDerp-I0vdKdNfV7IiDZOi
I have no idea if this was cheese or intended, but if it's cheese I have NO IDEA where I was supposed to go. I feel like I've been able to proceed normally from here, though, but that power up down there, sticky, keeps respawning.

Overall experience was just amazing though. I'm having so much fun with it, and excited to finish it. I'm still kind of awestruck that somehow this combination of my favorite things - body horror, mario and metroid exists and was made by the creator of my favorite game ever and was just so goddamn fun.

Thanks a lot for the feedback! Glad you enjoyed it!

For the controls suggestions, my initial plan was to have support for keyboard-only & gamepad input, but dropped those plans due to lack of time. My intention at the moment is to return to those features once I've rested a bit from the development, though. The WASD input you mentioned in Edit Mode is leftovers from this attempt to support non-mouse input, just left unfinished.

The route shown in the clip is indeed unintended, but in a way I'm glad it works because the game as it is lacks any guideposting so it's probably fairly easy not to know whether a given approach is correct or not. I might try to help with this a bit with later updates. The respawning powerup is definitely a bug, though; whoops.

I'm trying to play this on my steam deck. It runs fine, but the image is clipped really badly around all the edges of the screen. Can the resolution be changed?

Would it be possible to get a screenshot of what it looks like? There are some things I can do to potentially help but it's harder to know how to approach this without extra context.

I was able to fix it by changing the resolution for the game in the steam settings for the game, under "properties" on the game's page.

Ah, interesting! I'll try to add a fullscreen option in later updates, I'd imagine that it'd fix cases like this by using the monitor resolution for figuring things out. Glad you found a fix, though!

Does the game autosave?

Every time you touch a checkpoint, the game saves. I guess I could put up a sign clarifying that.

It autosaves at checkpoints. I got to one and quit out and it remembered my progress/coins. 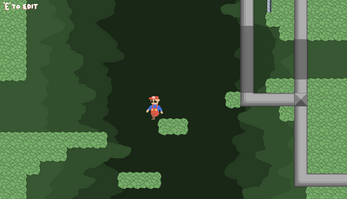 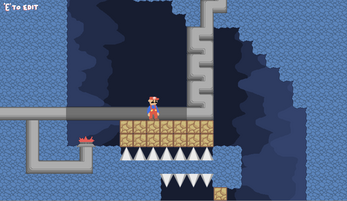 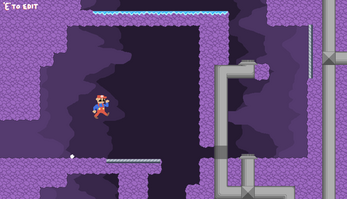