Another solitaire, this time with actual Baba Is You mechanics! Stack all suits in order from 1 to 10, and form rules to help you on your way!

How to play:
- Use left mouse to move cards around
- Click on the "Display rules" checkbox to see the rules description 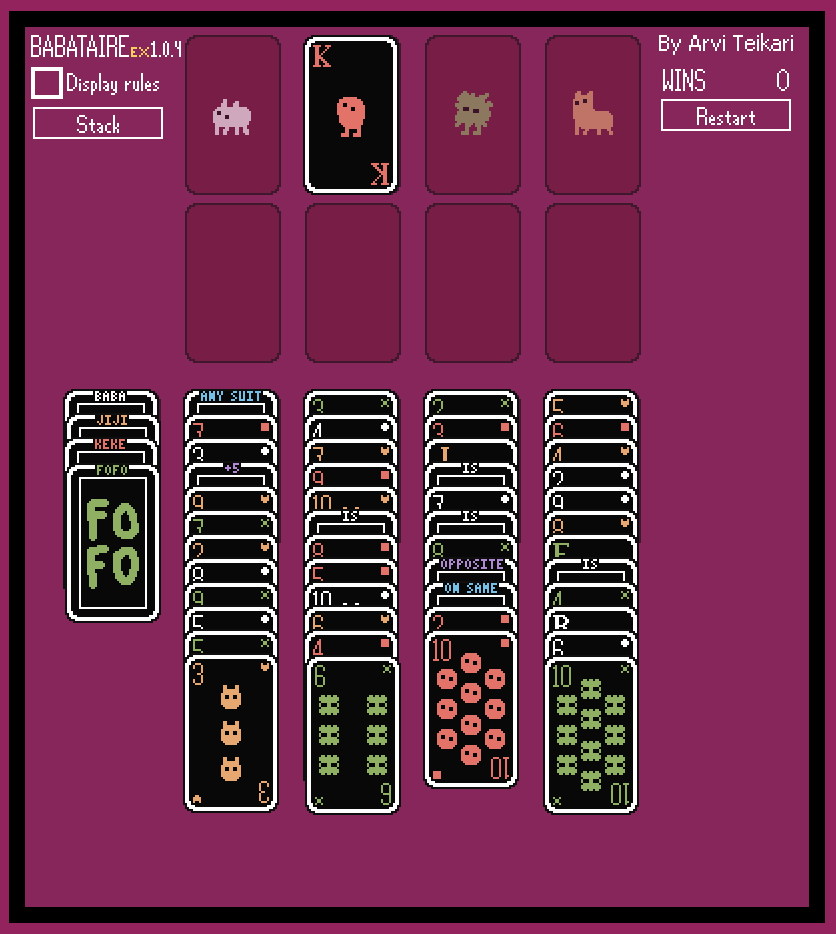 is this unwinnable? really needs a tutorial

Agreed that the game'd really benefit from a tutorial; for that particular setup, you could move K10 to a middle slot, the the K2 onto the top slot, then keep putting cards onto the middle slots until you dug out the first Is, which'd let you free up some of the middle slots by forming rules.

I got about 10 cards from the end, when I realised I had made an unsolvable situation. I was still able to whittle it down to 5 cards, but I wasn't even able to make a 9 anymore at the end, regardless of which suit it was. So not sure how that's possible, but it happened :b

Using the rules in certain combinations can cause those situations, yeah

I retried something as 10 times before understanding the way it behaves (tenacious because I was really hooked by the concept ^^). Perhaps a highlight on the places a card can go (when you hover it) could help?

I sadly miss-clicked on Restart while wanted to check "Display rules".... while I almost finished the game :/
A popup "Sure?" could handle that ?

I think I'll make it so that you need to hold the button down for a bit before it takes effect.

Thanks for the feedback! I'll consider the highlighting (it's potentially a bit of an ordeal to implement with how the rest of the engine is done, sadly).

I think it would just make a lot of sense if the “Restart” and “Stack” buttons just changed places, with restart under the score, which you never need to click.

I nearly lost my streak going to click where Stack used to be after updating. Noticed just in time.

I knew that switching the locations would cause some confusion, but my hope was that it'd still be overall better in the long run.

Lovely concept, however the realization that "ON ANY" is pretty much the only rule that is required to beat the game shrinks down the excitement from solving this otherwise neat puzzle. It was cool to tryhard without it, but once the realization came, every other rule had become useless and the solution was just a matter of time and clicks.

Dk what to do with this(maybe restrict the rule rearrangement), but imo this rule is too good that it ruins the game for me, that otherwise would have been very replayable.

Thanks for the feedback! I tried to adjust that rule slightly more to improve the balance even further. 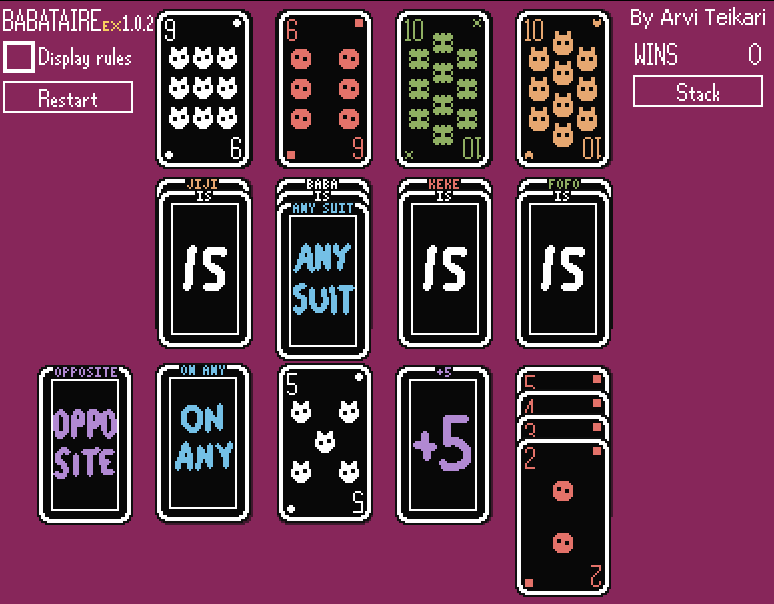 This is really cool :D Thought I was almost done and then I was here :/

This was fantastic.  I had to loose 4 or 5 games before I understood, but it was fun!   "is any #" was essential.  I had 3 suit names available and was able to juggle.

This was a very delightful mess! It's really fun, especially when you line up a [Suit is Any#] rule. I did notice that the Wins counter resets when you press Restart which is a bit odd

I think this is an engine thing, maybe? I noticed that Babataire and Cavern Sweeper both had this bug

Small bug: - you can stack a suit card on IS in the middle slots (ex. IS BABA), but if you pick up the stack you can’t put it back down (unless, presumably, there's another suit card available to stack onto). On the other hand, you can’t stack a quality on “IS” at all unless there’s already a suit card below “IS”.

I really struggled with the rules in this one:

- When I read “face card” I think of the face cards in normal cards, which are just regular cards with high value. I assumed the B, K, F, J cards were the suit cards at first (this would probably be easier to understand if I’d played the original babataire) and got pretty confused. I think it’d be easier for me to understand if they were called “rule cards”.

- the fact that the colors of the “any suit,” “opposite” and “any #” cards match the suit cards made me feel they were part of the same suit in some way but that doesn’t appear to be the case

Thanks for the reports!

I gave this a proper read and will adjust the rules text a bit based on your feedback & fixed the bug :)

managed to finish a game with the new changes! the rules are very satisfying to work with 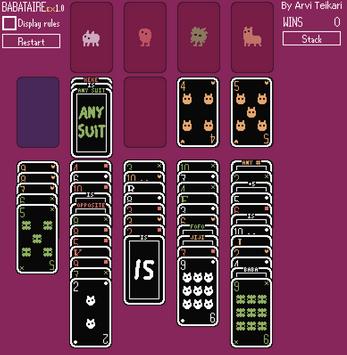