A downloadable deductible for Windows

Baba needs help filing taxes, and the deadline is tonight! Help Baba in order to make it in time.

Made using Multimedia Fusion 2 by Clickteam

BABA filing taxes is a amazing look into the unjust world of hard tax filing processes. 10/10 would tax again. This game is so simple and cute.

I'll do anything for my friend BABA.

The experience of filing Baba's tax forms has puzzled me.

First of all, the realization that Baba- an adorable cartoony creation- must abide by society's standards and laws of humans has given me pause.
If Baba lives in a universe where Baba has to report to the tax ministry while not even having arms to fill the tax forms, and the form acknowledges that it could indeed be filled by a confidant, then why enforce anything requiring paperwork for beings with no fingers in the first place?

This led me to think of the root of this problem.
A tax legislation, involving at least some percentage of beings who could not possibly abide by this decree without assistance.
What cruel entity would dictate such laws upon their citizens? An autocracy perhaps? Or a flawed democracy?

Autocratic regimes are usually efficient.
Otherwise, the tyrant in charge would not last long.
Judging from this form, which I remind you is a formal government document, this could not be the case.
I have filled Baba's signatures many times where only one per page would suffice.
In fact, some questions on this form reflect nothing of Baba's income or any data that could be used to even collect the tax.
There is a question about place of residence, but it is a choice question with seemingly nonsense answers.
Also I asked Baba for Baba's ID. Baba looked at me with a concerned expression. This government hasn't even issued proper Identification numbers to their citizens!
Thus, we can conclude that if this is an autocratic nation's taxation form, my mind would be at ease, knowing that this government shall crumple soon due to gross incompetence. Incompetence that will either collapse in on itself from within, or spark a revolution.

But if Baba lived in a democracy, this would be quite puzzling as well.
If democratic leaders chosen by citizens would neglect a certain population of cute beings, with no ability to fill out a formal document, are they making this document vague and unofficial on purpose, as a sort of ceremonial gesture meant to not actually enforce tax laws on beings like Baba?
Why not? Perhaps there's a different way to let Baba do Baba's part without exempting tax for Baba entirely? Why even bother with a ceremonial- and in my eyes, condescending- document in this case?
Or are they simply incompetent, and this surely will spell out a short-lasting rule, either ousted by voting in new leaders or a total change in government (if not collapse into anarchy)? Since as it stands, there is no way for a government to function without proper tax channels.
No tax means no government funding, means no infrastructure or government positions, means chaos.

In conclusion: the writing's on the wall. Baba will not have to endure a ridiculous tax policy for much longer.
You don't need to be well-versed in political science to see that a big change is coming. To what end, only time will tell.

My sincere hope is that Baba will have the mental fortitude to deal with whatever bureaucratic challenges might be coming Baba's way.

It may not be easy, but I'm certain that Baba will be alright at the end of it.

You got this, Baba.

I thought the ID/number thing was B-48-A

Guess it's not though, just had to check :P

The tagline description for this reads, "Help Baba be a member of society." This suggests that Baba is just starting to be incorporated into a society. Since the responders Baba, Fofo, Keke and Jiji are mentioned, I think the taxes could be an experiment in alpha/beta stage. Me doesn't know what taxes are, which seems like it could be an oversight on the council's part, maybe by not notifying him.

Hmm...Can't the government just ditch the currency system and get their own resources?

What do you think?

(I don't know much about finance or politics so sorry lol)

Damn.. Respect for you for writing a whole deep essay on this game.

Concept and art are really good, but the gameplay is boring and frustrating.

So you're saying it's thematically accurate? (:

i wish it was free

if you want to play, you can click the download button and there is a "take me to the downloads" link, its not mandatory for you to pay to play, but im sure the dev would appreciate you playing the game none the less

Bit of a fun silly game.

Did a video of  it. Taxes can be pretty scary!

Reply
ItsDresden4 days ago(+1)
Super cute little game about filing some taxes and forging some signatures.  I didn't do the best, but it was fun nonetheless!
Reply
ahi64 days ago(+4)

Comitting tax fraud has never felt so cute before! Would recommend.

the best horror game what i ever seen

I love it. I just got an A. Not even using a graphic tablet. Just the magic mouse. I dont know if anyone else got a problem, because Im using wine (the program) to play this and it scrolls super fast.

Had a lot of fun with baba even if I realized that I will have to soon file taxes yay ;u; - thank you for the free lil game! Psychological Horror is an apt tag

This is a cute game!

Man who knew doing taxes was so easy? i should become a professional do-er of taxes

same creator of baba is you?

I think I got baba convicted of tax fraud

This is an entertaining game lol. It's fun weird and a little bit dark - the perfect combo :D

Reply
Gamery Den13 days ago(+1)
What a fun short game. All the dread of doing my taxes this year so I feel you baba 🤣
Reply
BenReber13 days ago

Baba does his taxes? I was under the impression he was part of the we-evade-taxes-because-we-have-never-done-anything-else-wrong-ever club with yoshi and pink slime from slime rancher.

BABA  IS  NOT  LITERATE

if theres a sequel it'll probably be baba EVADES taxes rather than files..

Thanks! I hate it

Hey so just wondering rq how can I make the game go full screen mode? 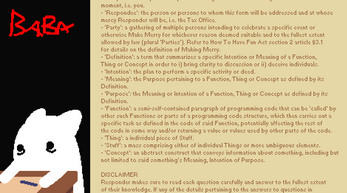